Before ascending to Wilson’s presidency at the age of 33, Havens taught courses in English literature and the humanities at Princeton, George Washington University, and Scripps College. President Havens, who was affectionately known to students as “Prexy,” oversaw numerous improvements to Wilson College, entertained prominent visitors to the campus, and advocated for the advancement of women’s education. Along with his wife, Lorraine Hamilton Havens, Paul generously welcomed Wilson students into his household for guidance and help with coursework, and taught a popular class in his living room titled "The Life of the Mind."

For information on copyright or permissions for this collection, contact the C. Elizabeth Boyd '33 Archives.

Havens appears in the front row on the far left. 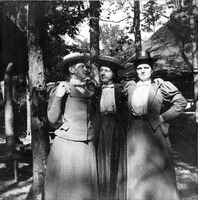 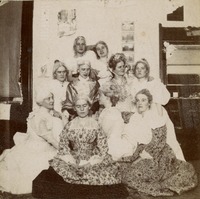 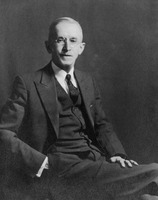 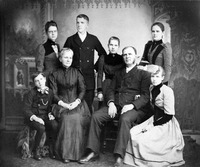 Page from the Lawrenceville School Yearbook, showing the school’s mandolin ensemble, of which Paul Swain Havens was director. 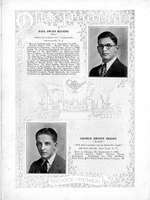 The Olla Podrida Board 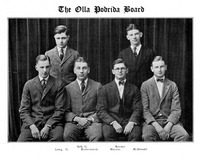 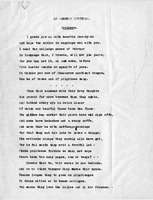 Poem written by Paul Swain Havens in the style of Geoffrey Chaucer, describing the challenges and hardships of student life.

The Forts of Antwerp 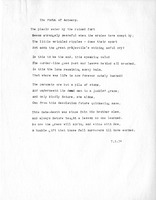 Poem found in the papers of Paul Swain Havens, reflecting upon the tragedies of war. 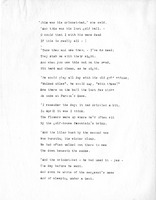 Poem found in the papers of Paul Swain Havens, reflecting upon a wife's mourning following the death of her husband at war.

The Soul of Loveliness 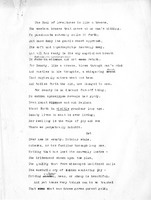 Poem found in the papers of Paul Swain Havens reflecting upon beauty and the natural world.

Drawing of a study room in the Claremont, California, home of Paul and Lorraine Havens. 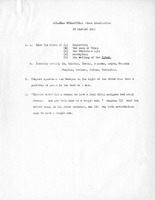 Instructions for the final exam of a Freshman Humanities course taught by Paul Swain Havens at Scripps College.

Comprehensive Examination for Students in Language and Literature

Instructions for a comprehensive exam for undergraduate students studying language and literature. This exam was issued by Paul Swain Havens during his time teaching at Scripps College.

Letter of Congratulations from T.S. Eliot 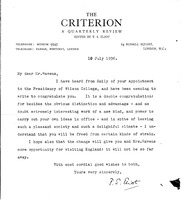 Letter written by T.S. Eliot congratulating Paul Swain Havens for his appointment to the presidency of Wilson College. Eliot and Havens were both American-born Oxford alumni. 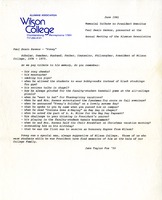 Dr. Havens: An Appreciation by One Alumna – For Many

He was destined for greatness: A Tribute to Paul Swain Havens

Photograph of Paul Swain Havens and Lorrain Havens outside of Ellen Browning Hall at Scripps College.

Women’s Place is in the World

Article written by Paul Swain Havens for the Wilson College Bulletin describing the importance of education in preparing women for the responsibilities of work, citizenship, and domestic life.

America Needs the College for Women 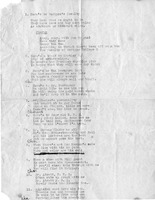 Lyrics to a humorous song extolling the faculty of Scripps College. 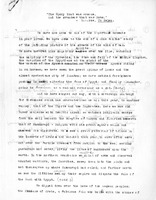 The first page from notes for a lecture delivered by Paul Swain Havens while he was teaching at Scripps College. This lecture was given at the end of a humanities course for first year students at the college.
View all 26 items