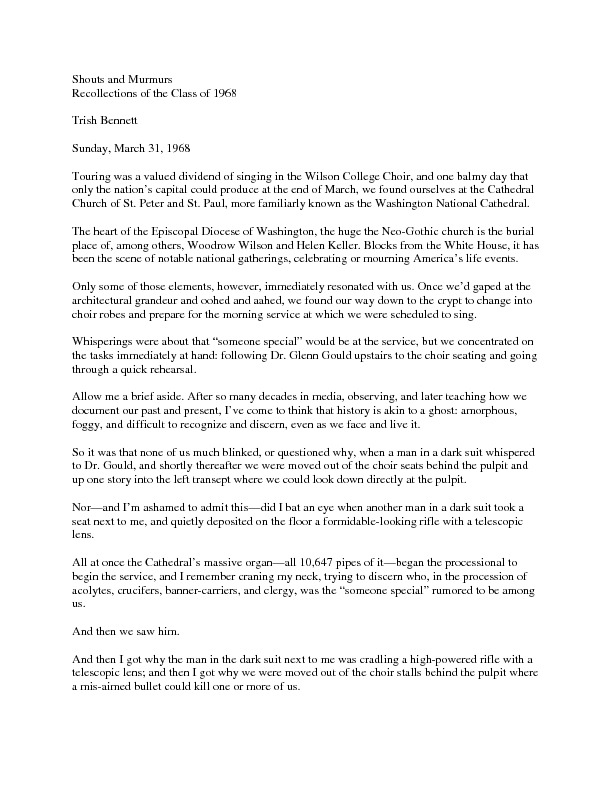 "Shouts and Murmurs: Recollections of the Class of 1968" by Wilson alumna Patricia Bennett. This writing showcases the atmosphere of the time in which the Afro-American Society was created at Wilson College. In this work, Bennett recalls traveling with the Wilson College Choir and hearing the last sermon Martin Luther King, Jr. preached.

The first African-American student to graduate from Wilson College was matriculated the same year as the 1954 Brown vs. the Board of Education decision. Since then, African-American students have danced, sung, played sports, and served in student organizations. In short, they have enriched the life of the College. This exhibit contains numerous primary source materials from the Hankey Center regarding Wilson College's Black Student Union (BSU). These photographs, articles, and more demonstrate the presence and importance of the organization, highlighting how the BSU has, for nearly fifty years, been  a propelling force for positivity and community on Wilson’s campus. Through the years, the goals of the BSU were changed by the political movements of the time. Though its tactics and name have evolved over its near fifty year tenure at Wilson, the Black Student Union has been a constant beacon, seeking to educate, engage, and rally the Wilson College community.

In 1968, the Wilson College Afro-American Society (WAAS) was recognized as a student organization. In the spring of 1969, the WAAS called the attention of the administration and faculty to issues its members thought needed to be addressed in a timely fashion. Some of these issues were: improving the admission and recruitment of minority students; the need to recruit and hire more African-American faculty and staff at all levels; and the addition of courses relevant to the history and experience of African-Americans. To bring even greater attention to its proposals, the organization staged a boycott of classes on April 28, 1969. The 1969-1970 Bluebook noted that its members “encouraged greater discussion and thought of the problems and goals of Black culture and recommended solutions benefiting the college community.” WAAS also sponsored college-wide cultural events such as Black Weekend and Afram 1980. Its successor student organization is the current Black Student Union (BSU). The current BSU's purpose is to "encourage African-American awareness, enhance the quality of life for members of the Black Student Union, conduct activities involving community outreach, and foster greater understanding of African-American culture and related issues."

(Nota bene: Information regarding the WAAS' imperative proposals, the college's administrative response, and the sit-in were gathered primarily from local newspaper articles and faculty meeting minutes. More information on the campus response can be found in Board of Trustee meeting minutes. These minutes remain closed to researchers for 50 years from the time that they were created, permission from the Board is required for outside researchers.)