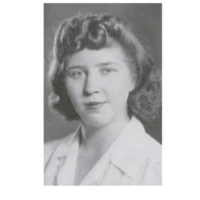 Edith Crowell Johnson Trager ’44 spent years analyzing the language of the Kiowas, a Plains Native American group living in Oklahoma, after earning an M.A. in linguistics. She received her Ph.D. in linguistics from the University of Pennsylvania in 1960. She was a researcher at Stanford University and a Fulbright lecturer at Tel Aviv University. She worked with Alan Lomax, the famous collector of thousands of American folk song recordings, on Parlametrics, a comparative study of conversational style.