While training for her upcoming work in Mississippi, Vail became more and more aware of the imbalance of power and the manipulation of authority. In response to what she perceived as a grave injustice, Vail wrote a letter to her parents that she had safely arrived in Oxford, Ohio, for the training and the first week's group had arrived safely in Mississippi for their work and her frustration and sadness over the three missing Civil Rights workers. "Then came the blow-the summer project's first casualties," Vail wrote them. "Three men had just arrived in Meridian (the 'safe,' relatively speaking, part of Miss.) and had immediately set out to investigate the ruin of a Negro church which was burned last week [...] At any rate, the FBI and Justice Dept. officials on the spot have refused to investigate the case."

"This lack of cooperation on the part of federal officials may unfortunately set a precedent for the summer—i.e., the local officials seem to feel [...] that they can get away with murder (literally)," she wrote. "At the moment there is evidently nothing at all in the way of protection between us and the ruthlessness [...] of Miss. officials." 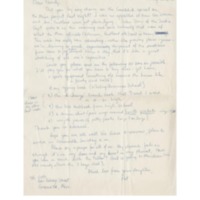 A letter from Pat Vail to her family discussing the Cronkhite special on the Mississippi Project, items she needs while out on the Project, and her move to the Greenville office. Transcription included. 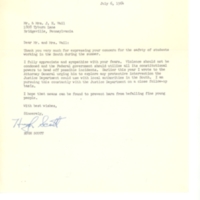 A letter from Hugh Scott responding to the Vail family's concerns over the student workers. 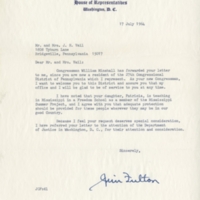 Follow-up letter from Jim Fulton containing a letter from Assistant Attorney General of the Civil Rights Division of the Department of Justice regarding the Mississippi Summer Project sent to Mr. and Mrs. Vail. 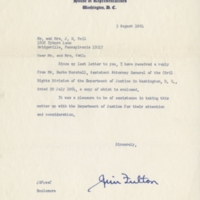 Letter from Congressman Jim Fulton to the Vails regarding Pat's participation in Freedom Summer and the need for federal protection for the workers in Mississippi. 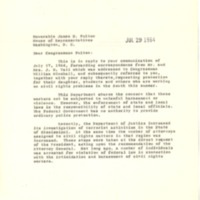 Letter from Burke Marshall, Assistant Attorney General, to Congressman James Fulton in reply to Fulton's own letter forwarding the concerns of Mr. and Mrs. Vail for the safety of the Mississippi Summer volunteers.

A recording of a conversation between President Johnson and Mississippi Senator James Eastland regarding the search for James Chaney, Andrew Goodman, and Michael Schwerner and Senator Eastland's view on the incident, which he called a "publicity stunt," can be found here. An additional recording, of then FBI Director J. Edgar Hoover updating President Johnson on the status of the car belonging to one of the missing Civil Rights Workers can be found here. These and additional recordings are available via the Miller Center of the University of Virginia.

The Walter Cronkite special entitled "The Search in Mississippi" can be viewed here via the video archives at CBS News.