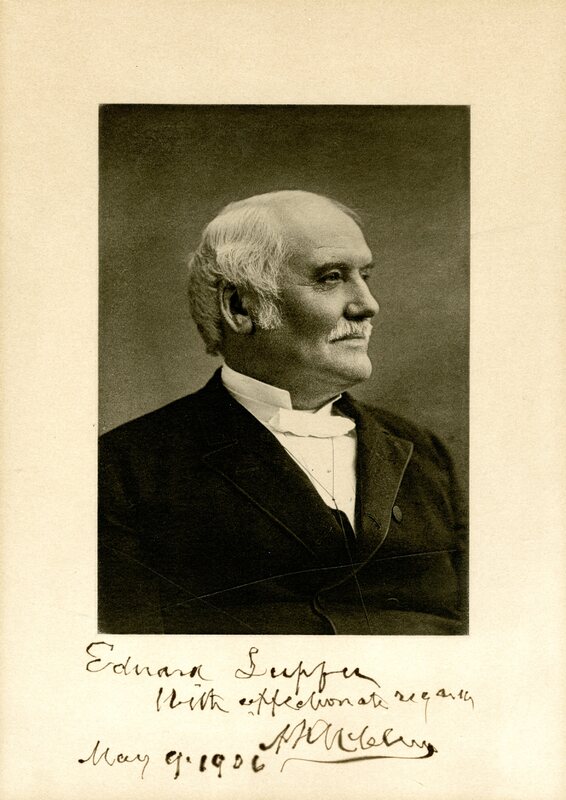 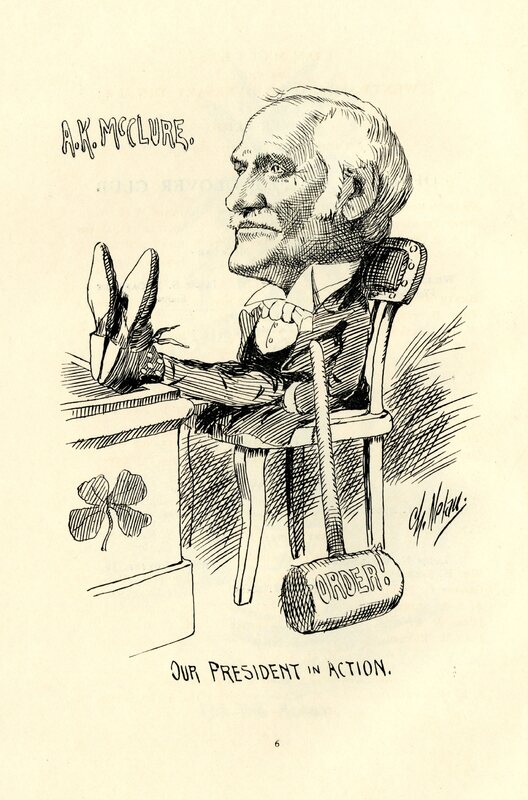 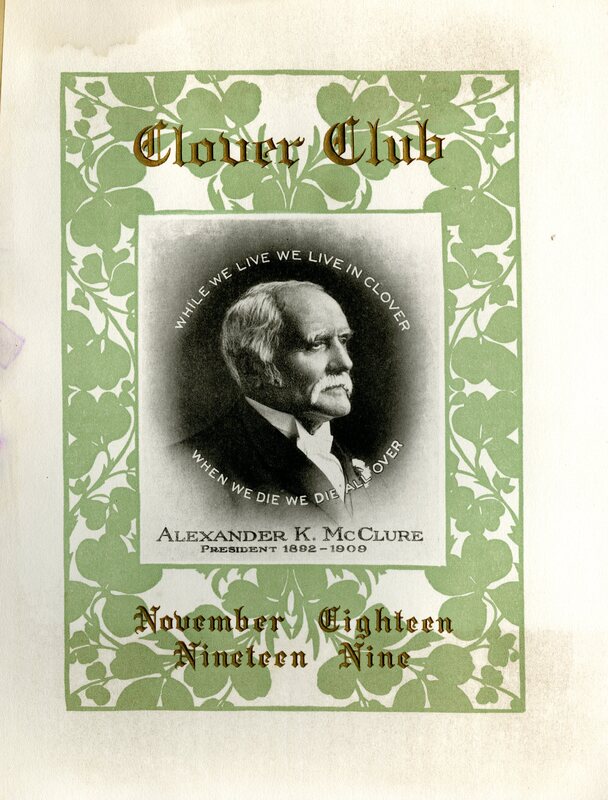 One special member of the Clover Club whose significance spans American politics, history and journalism as well as the history of Wilson College was Alexander K. McClure. However, McClure was more than just an active member; he was among the club’s founders and its longest-running president from 1882-1909, holding the position until his death. Born on January 9, 1828, and then raised in the central Pennsylvanian Frontier, McClure’s political and journalistic interests were sparked at a young age. His father, Alexander, was an anti-slavery Whig who subscribed to both Whig and Democratic newspapers, and this undoubtedly influenced McClure. He began his career in journalism as “a handsome and stalwart youth of seventeen.”[1] Eventually, John M. Pomroy – a prominent political figure for the Whig party in Pennsylvania at the time – reached out to McClure, requesting his assistance with one of the oldest journals of central Pennsylvania, the Franklin Repository. This Whig-supporting newspaper, tracing its origin back to 1790, was based in Chambersburg, PA. McClure promptly accepted the position of editor and lived in Chambersburg from 1851-1864.

These years were not all peaceful, however. Acting as Republican Abraham Lincoln’s campaign manager in Pennsylvania in 1860, a friendship blossomed between McClure and the eventually elected U.S. President. McClure never participated in active military duty, but during the Civil War, he supported the union’s war effort in various ways, including the recruitment of union soldiers. For a period of less than six months, he was given the temporary title of Colonel as he raised troop levels. McClure’s well-known support of Lincoln also made him a target during the Civil War. On July 29, 1864, “General John McCausland had entered the town with 3,000 Confederates and demanded a tribute of $100,000 in gold, or $500,000 in greenbacks. The bank had already sent away its funds and the citizens claimed they could not pay, so at 10 o’clock, in accordance with his instructions, McCausland began burning the town.”[2] A special squad went to Norland, McClure’s family home, searching for valuable information and correspondence before burning the house and barn. The Repository building – the newspaper that brought McClure to Chambersburg many years earlier – was also destroyed by fire. As devastating as this attack was for McClure and the townspeople, they determinedly rebuilt from the rubble and ruins. McClure rebuilt the homestead after the war and then soon sold the home (now Norland Hall, home to the Admissions Office) and its 52-acre property to the Board of Trustees for the newly created Wilson College.

McClure and his family moved to Philadelphia where his passion in politics continued. At various times, he held positions in the Pennsylvania House of Representatives, as well as the Pennsylvania Senate. He also returned to newspaper editing in 1875, founding the Philadelphia Times. He only stepped down from the position as editor in 1901, after twenty-six years, when he sold the newspaper itself. His dedication to the Clover Club was mirrored by the club’s dedication to his leadership and many successes. At least twice during his lifetime, the Clover Club celebrated their second president with banquets in his honor. The club honored him on December 9, 1896, for his fiftieth anniversary in journalism with a banquet. They held another dinner in his honor, celebrating his retirement from the Philadelphia Times’s editorial chair in May 1901. Another dinner hosted by the Clover Club on November 18, 1909, paid tribute to McClure after his passing. The club members gathered at the Hotel Bellevue-Stratford for a lavish Thanksgiving dinner, serving many of the club’s staple dishes: Lynnhaven oysters, Saddle of Darby lamb, and a drink from the Loving Cup. At this gathering of thanks and community, the Clover Club also performed a memorial service in the memory of Alexander K. McClure, club president 1882-1909.