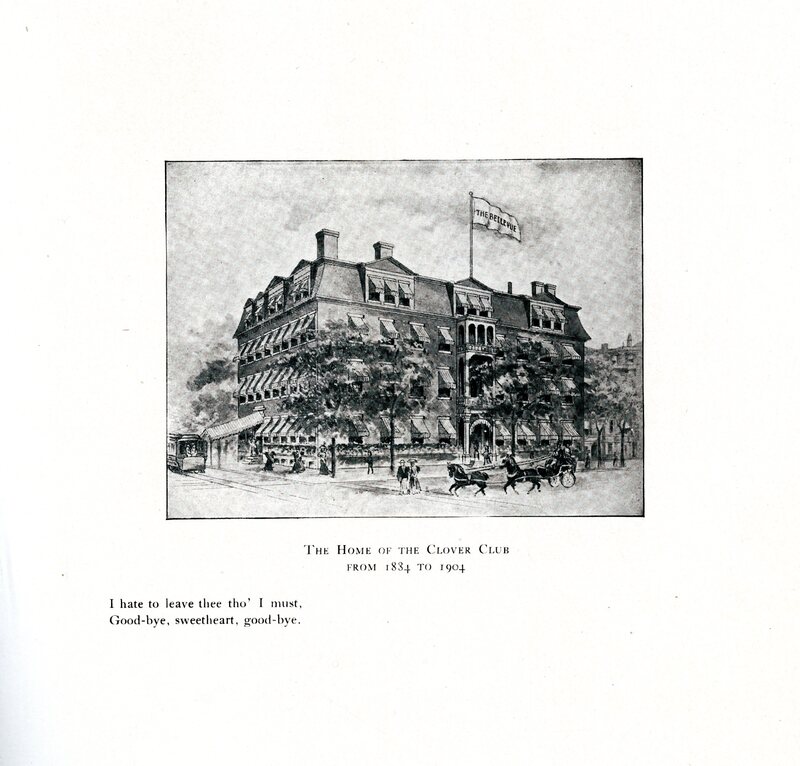 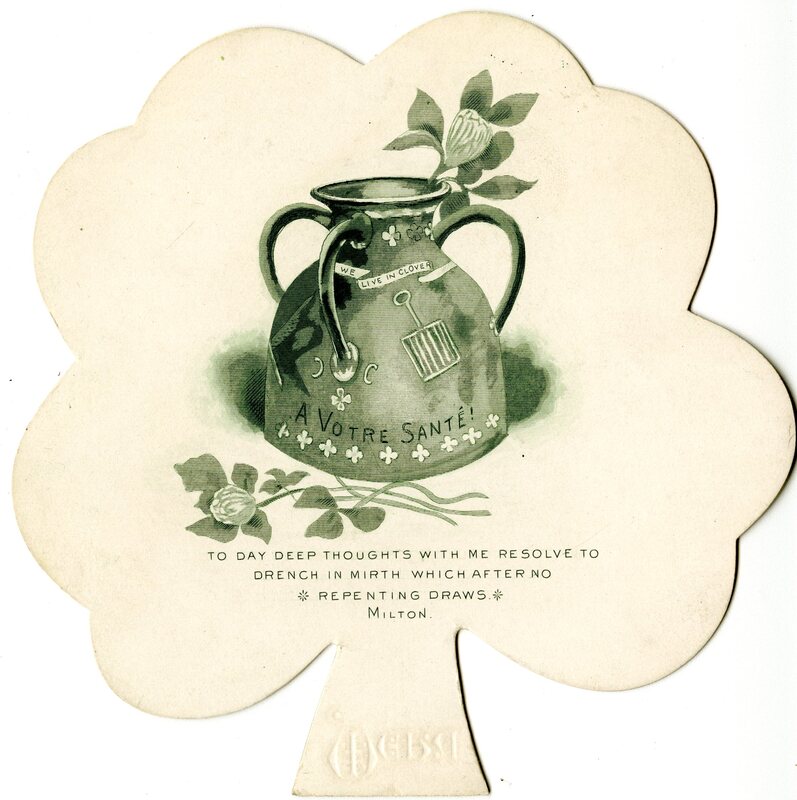 Originally, the Clover Club hosted their dinners at the Girard House. This tradition, however, was short-lived and soon replaced with what was destined to become a longer standing one. The club’s members gathered at the Hotel Bellevue for their fourth official dinner. The Clover Club continued to host its dinners at the Hotel Bellevue so consistently that the club’s beautifully detailed dinner menus often highlighted their much loved “home.” A few of these eye-catching menus can be seen in the following sections of this exhibit.

A tradition that began at the dining club’s very first official dinner was the gifting of a silver spoon to a member when a new child was born into his family. On January 19, 1882, the first member to bear the honor was the club’s first president, Moses P. Handy. He received a silver spoon in honor of his daughter’s birth. According to Mary R. Deacon, “Each member of the Clover Club, upon the birth of a child, is presented in open session with a handsome, properly inscribed silver spoon for the offspring. When the fact becomes known, at the dinner following, a member, who has been selected, calls the hero to his feet and makes the presentation.”[1]

Another better-known tradition involved the Clover Club Gridiron or Grill. Made of pure silver, right down to the silver clover emblem found in the center of the grill, this item was presented to the Clover Club at its Fifth Anniversary dinner. It was gifted on January 20, 1887, by Peter A.B. Widener and William L. Elkins, two of the club’s honorary members. Sitting directly in front of the president at dinners in the center of the head table, the grill was 16 inches by 20 inches in size. Atop it rested the Clover Club’s Loving Cup, yet another item that was always present at the club’s extravagant dinners.

The Loving Cup contained what Deacon describes so poetically as “the nectar of the gods.”[2] The cup was presented to the Clover Club on February 16, 1882, by Colonel Thomas Potter, Jr., one of the club’s active members. Like the grill and the spoons, the cup was also made of silver. With three handles and a wide mouth, the Loving Cup was expertly decorated with intricate clovers all over its body.

Drinking from the cup was deemed its own course. Many of the dining club’s elegant menus scheduled the Loving Cup just after the soup. The president would drink from the cup first to the toast: “The health of all our guests,” or also “To our noble selves.”[3] It was then passed to the guest on his right who rose when his name was called and drank from the cup as well. The members were to drink from the Loving Cup as well; however, their names were not announced. While drinking from a communal cup certainly added a sense of community among the members and guests present, the announcing of each guest’s name was also a way to let everyone know who was present at the dinner. When a guest stood with the cup raised, the members were known to applaud. The least known guest often received the grandest reception as a way to make him feel just as at home with the Clover Club. What exactly would be found in the Loving Cup? This libation was described as a potent, strong brew. And many poems and songs were sung by the Clover Club’s members in dedication to the cup’s contents. At the club’s First Anniversary dinner, hosted on Thursday, January 18, 1883, President Handy was presented the Loving Cup along with the following verses:

This tankard old, of beaten gold

And silver, traced with symbols over,

Men skilled in trade have deftly made

For the use of the Club of Clover.

Its handles there in grace we see

As it opens wide to the gourd inside,

Its mystic brew the secret few

Cherish, as maid the word of lover;

Nor mix the wines from common times,

But keep for the meet of Clover.

With silken sails all ‘broidered over,

For this brew of the men of Clover.

By custom taught this stoup is brought

Our circle ‘round to be a rover,

So to you we hand this cup, to stand

And drink to our guests in clover.[4]

There are numerous other odes dedicated to the Loving Cup as well as to the Clover Club, in general. As a dining club with a serious interest in the arts, its members were known to write poetry, songs, speeches and essays on a variety of subjects, and short stories.