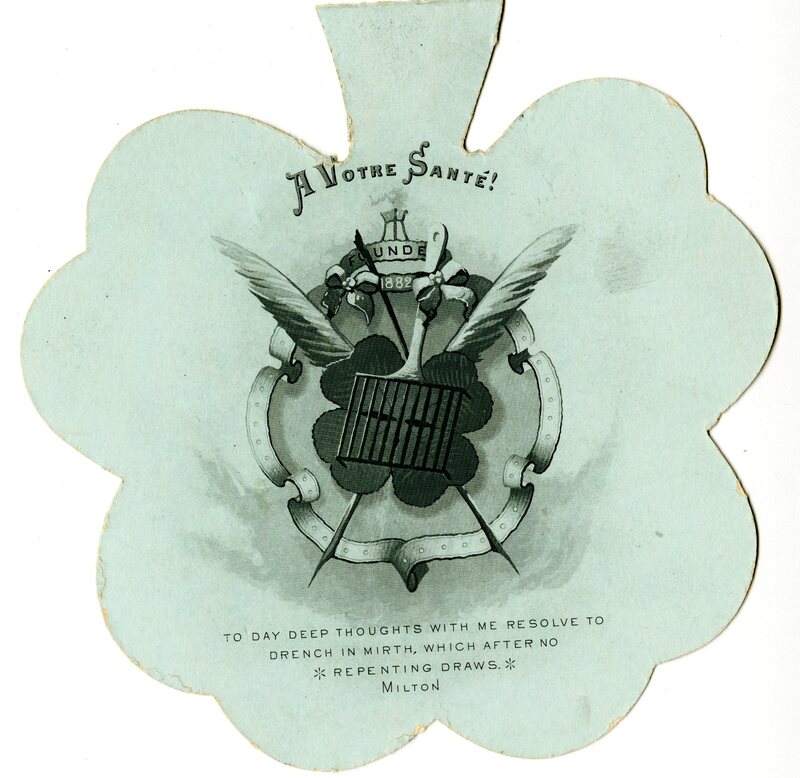 Among the other possible names considered, how and why did its members settle on the clover as the club’s name and identifying symbol? A member since the Thursday Club’s heyday, William R. Balch of the Press is not only recognized as the individual who suggested that the new dining club be named the Clover Club, but he also designed the club’s emblem. In the image of the emblem provided, details to note include the French phrase, À Votre Santé! Translated to English, it means “to your health.” The toast to good health reflected the Clover Club’s purpose: to create a community of good cheer and camaraderie. The original emblem, adopted on the day of the club’s first dinner gathering, also marked the year of the club’s foundation, 1882.

The meaning and symbolism behind the clover – four-leafed or otherwise – spans across science, nature, art, and religion. Throughout human history, the clover has represented good luck, male energy, and a charm against hexes and negativity. The important role that clover plays in the natural world becomes evident when considering how traditional medicine utilizes both red and white clovers for a variety of ailments. Likewise, clover is the main nectar source for honeybees, making its existence crucial for the species.[1] The true reason for the club’s choice of “Clover” seems to be far less superstitious or scientific, leaning more toward nostalgia and warmer days. Mary R. Deacon, wife to one of the Clover Club’s past members, observes in her book, The Clover Club of Philadelphia, “The word [Clover] pronounced has a fullness and a sweetness to the thought, and recalls the brightest memories of childhood.”[2] Deacon was not alone in her sentiments. Robert G. Ingersoll was invited to the Clover Club’s first anniversary dinner in 1883 and, although he was forced to send his regrets, he could not help commenting on the club’s name in his lettered response:

“A wonderful thing is ‘clover.’ It means honey and cream; that is to say – industry and contentment; that is to say – the happy bees in perfumed fields, and at the cottage gate ‘Old Bos,’ the bountiful, serenely chewing satisfaction’s cud, in that blessed twilight pause, that like a benediction falls between all toil and sleep. This clover makes me dream of happy hours – of childhood’s rosy cheeks – of dimpled babes, of wholesome, loving wives – of honest men, of springs, and brooks, and violets, and all there is of stainless joy in peaceful human life. A wonderful word is Clover!”[3]

Beyond its symbolic meanings, the clover’s significance to the club was ever more strengthened in the members’ incorporation of the flower wherever possible. Invitations, calendars, and menus were often in the shape of the clover. At one point, there even existed special parchment which included the club’s emblem and well-known saying: While we live, we live in clover; when we die, we die all over!

← The Clover Club's Beginnings
Clover Club Membership →
Why the Clover?