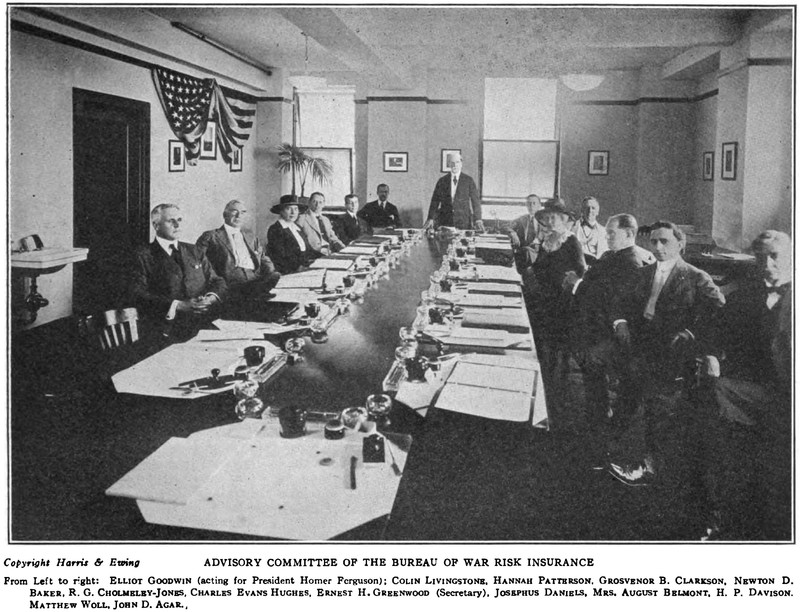 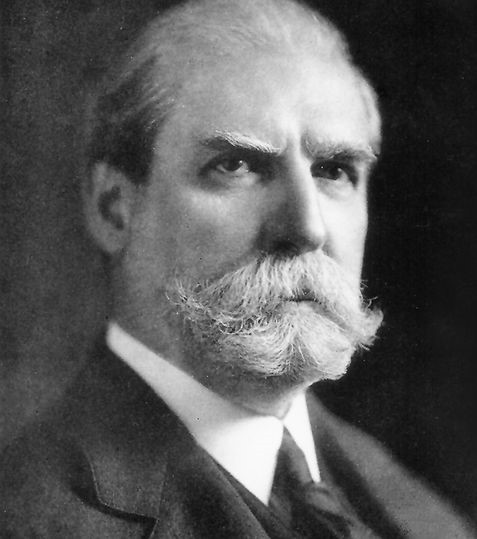 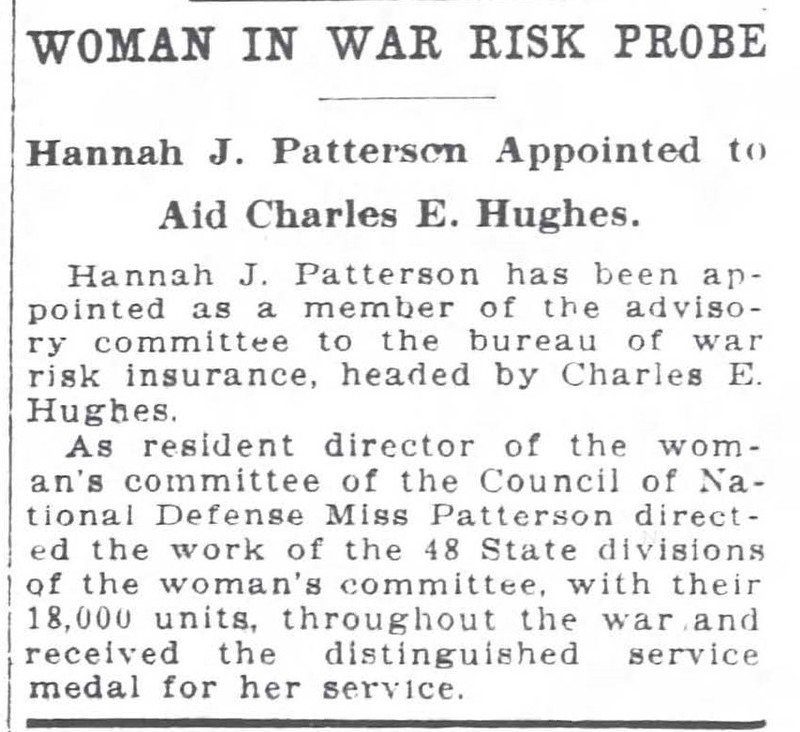 In July 1919, Clarkson appointed Patterson to the advisory council of the Bureau of War Risk Insurance which was under the direction of Charles Evans Hughes.

The War Risk Insurance Bureau had been created immediately upon the outbreak of war in Europe in 1914 in order that the commerce of the United States might be adequately protected. It provided insurance for American vessels, their freight and cargo against loss or damage from the risks of war. In addition, with the passage of the selective-service draft in 1917, Congress passed an act providing monetary compensation for death or disability resulting from war service for soldiers, sailors and marines. The premium rates were the same as insurance rates in peace time with the additional wartime cost being born by the nation as a cost of war.

The Advisory Council was formed to improve the service of the War Risk Insurance program by effectively coordinating and consolidating the many separate activities. Grosvenor invited a “specially selected list of persons, each of whom was particularly qualified to lend counsel and aid in the solution of the many important problems then before the bureau, particularly with reference to proper reorganization and the administration of the bureau.”

The invitation called for a conference in Washington covering a period of three days – July 18-20, 1919. A telegram signed by the director and the list of those to whom it was addressed followed:

Confidential. There is no matter which more directly involved the honor of the Nation than that with which the Bureau of War Risk Insurance deals.
Since my appointment as Director of the bureau of May 19, 1919, I have been making an exhaustive study of its operations and have instituted several important changes. Realizing so thoroughly the vastness of the problem and its effects upon the country at large, I deem it a matter of great importance that I have immediately, for the purpose of effecting a thorough program, the benefit of the strongest possible counsel.
For this reason the Secretary of the Treasury and I are inviting the following persons to meet in Washington July 15, 1919, in a special conference to last three days
Among those requested to serve were:
Charles Evans Hughes, Chairman
Newton D. Baker, Secretary of War
Josephus Daniels, Secretary of the Navy
Grosvenor B. Clarkson, Director
Matthew Woll, Vice-president of the American Federation of Labor
Henry Pomeroy Davison, senior partner at J.P. Morgan, who established the Federal Reserve
John C. Ager, National Catholic War Council
Livingston Farrand, American Red Cross
Colin H. Livingstone, Railroad executive, and President of the Boys Scouts of America
Mrs. August Belmont, actress and philanthropist
Miss Hannah J. Patterson, Woman’s Committee of the Council of National Defense

The work of the War Risk Insurance Bureau was complicated by the need to communicate with individual servicemen or their families. Clarkson urged those whom he had invited to participate to accept the invitation saying:

“The speed with which the Army and Navy are now being demobilized necessitates dealing with each individual discharged man rather than with the Military and Naval Establishments and certain steps must be taken at once to successfully accomplish the large work of the bureau that it may give satisfaction to those men who have rendered such magnificent service to their country. In the selection of the committee the Secretary of the Treasury and I have considered only the matter of service to the discharged soldier, sailor, and marine and his dependents, and the peculiar fitness of each one selected to successfully accomplish this service. May I respectfully urge that you add to the distinguished contribution which you have already given to the Nation by accepting this invitation at the earliest possible moment?”

Patterson had been selected because of her reputation as an efficiency expert and organizer. She continued to use her network of women’s organizations to convey information about benefits and to locate the families of servicemen.

← Woman's Committee of the Council of National Defense
Assistant to the Secretary of War Newton D. Baker →
Bureau of War Risk Insurance