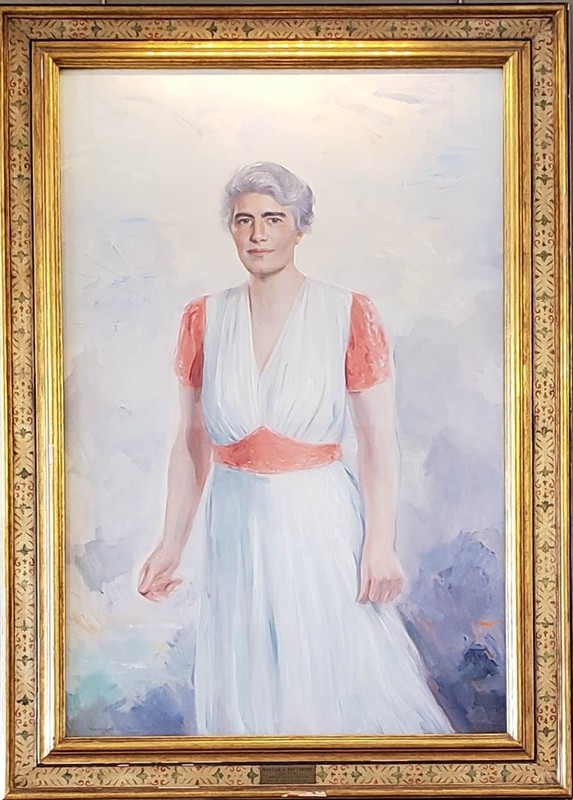 After Hannah Patterson's death, her close friend Jennie Bradley Roessing commissioned a painting by Wayman Adams. Roessing presented the painting to Wilson College president, Paul Swain Havens in 1938 and Judge Sarah Soffel gave this tribute to Patterson on the occasion of the unveiling:

"Hannah Patterson was a woman of many parts. She was in no sense of the word the ordinary individual; to the contrary, there was about her something Olympian. Where the average person is content to loiter along the plains of life, she stepped from mountain to mountain, a rugged individualist, a true aristocrat who impressed all by the distinction and nobility of her bearing. She was a self-disciplined person. Her life struggle against a frail body, the conquest of physical handicaps by sheer mental vigor, gave her an inner strength that made her a Rock of Gibralter to be depended upon in any situation. Throughout her career run certain themes which at times dominate and color a particular phase of her work, all eventually and inevitably interwoven into a glorious symphony, ended all too soon by death. Those of us who knew her well see her as the pioneer who walked in the sunlight and pointed the way; as the feminist who believed in women and sought for them equality of opportunity with men; as a leader in behalf of causes not yet won.

"Over and above everything, we think of the nobility of her character. Hers were the rugged virtues of the Puritan; courage, industry, initiative, self-reliance, integrity.

"Hannah Patterson was a great soul. She combined intellectual and spiritual greatness with innate modesty and humility. Those of you who always saw in her the poised, gracious woman who met people with such a charm of manner, never realized she was innately shy.

"As a child she attended the public schools of West Newton, the little town of Western Pennsylvania in which she grew up. She graduated from Wilson and then went on to the University of Pennsylvania to study law, a pioneer in a profession that knew at the time few women students. Illness compelled her to give up the study of law, and thus was ended the promise of a brilliant legal career.

"A lifelong trustee of Wilson, she had a vital part in placing the College on a sound financial basis, in raising the endowment that made possible professors of ability and distinction and gave to the College a Grade A rating. These are matters known to all Wilson Alumnae.

"We see the feminist in her service to the cause of suffrage. Entering the ranks as a volunteer at a time when suffragists were ridiculed and caricatured, she rose rapidly to a position of leadership, serving officially with Mrs. Roessing – and this was the first time the two women had worked together – on the Boards of the Pennsylvania Suffrage Association and the National Association [note: this is inaccurate. Patterson and Roessing began working together in 1904 with the Allegheny County Equal Rights Association] Her work in behalf of suffrage brought her into close association with the pioneers of that day: Dr. Anna Howard Shaw and Mrs. Carrie Chapman Catt, both of whom had the highest regard for the extraordinary ability and organizing skill of the younger woman. That women were denied the right to participate in government merely because they were women, offended her strong sense of justice. Thus it was that the interest in the cause of women that manifested itself in the young girl became a passion as she grew older – the desire to advance women of ability, to secure for them equality of opportunity.

"The War, coming as it did before the victory for suffrage had been attained, afforded a dramatic setting for the extraordinary ability of Hannah Patterson. Called to Washington to serve as Assistant to the then Secretary of War, Mr. Newton D. Baker, she became the first woman in the nation to hold a position of such distinction. She worked at all times directly with the Secretary of War, the generals and heads of Army and Navy. To coordinate the activities of women, a National Council of Defense was established. Dr. Anna Howard Shaw was made the head. Hannah Patterson the Resident Director in Washington. Her war service was recognized by Congress by the award of the Distinguished Service Medal. It is significant to note in this connection that a committee of three, headed by General Peyton March, was appointed by President Wilson to determine what women in the United States should be so honored. Women’s organization throughout the whole United States were asked to submit lists of names. One name that appeared on every list was that of Hannah Patterson.

"After the War, she studied for a short time at Columbia University, taking courses in Russian and Corporation Finance. This skill was later to be turned to use in the only paid position that she ever held; that of broker and investment director with the J.H. Holmes Company of Pittsburgh. She became recognized as an authority in advising women; men too recognized her sound financial judgment. This, the closing chapter in a full and complete life, is the one in which her service was given to the cause of good government and leadership in the selection of progressive, able, liberal-minded candidates. It was during these years that she served as chairman of my campaign. I was persona non grata and anathema to the politicians of Allegheny County, but was elected by the largest vote ever given to any judicial candidate in Allegheny County. I tell you this because it is a tribute to the extraordinary organizing ability of Hannah Patterson.

"In presenting this portrait to Wilson College, I know that Mrs. Roessing has been actuated by the hope that the undergraduates assembled here today and their sisters of tomorrow may find in the life of Hannah Patterson the stimulus and the inspiration that will drive them on to higher deeds, to nobler achievements. For hers are deeds which should not pass away. Hers is a name that must not wither.

"Youth must ever see in Hannah Patterson, who was so richly endowed with talent and beauty, the pioneer, feminist, leader, who pointed the way and blazed for them the trail. Of indomitable will and courage, she gave unstintingly of her time and thought to advance women. She filled with distinction high posts of honor at home and in the nation. Hers was a life rich in service to her country and her fellow citizens. Justice and integrity, strength and honor were her handmaidens." 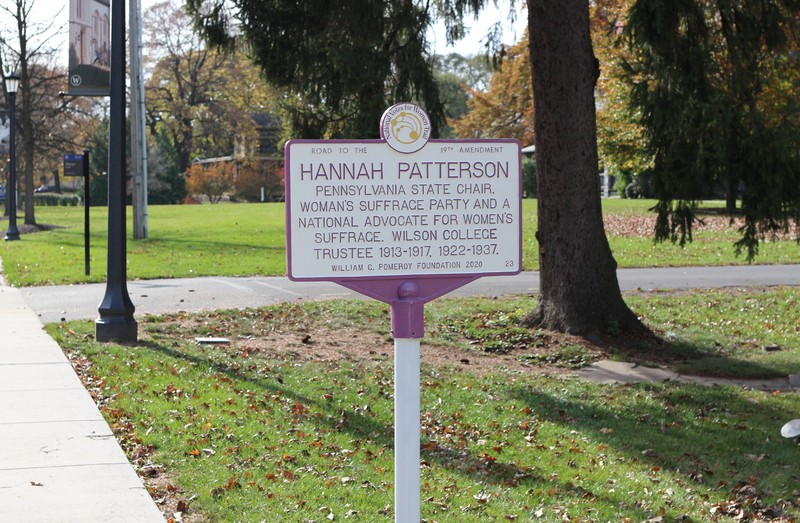 On the 140th anniversary of the birth of Hannah Patterson on November 5, 2020, a historic roadside marker was installed at Wilson College in honor of Patterson's role in Woman's Suffrage and her dedication to Wilson. 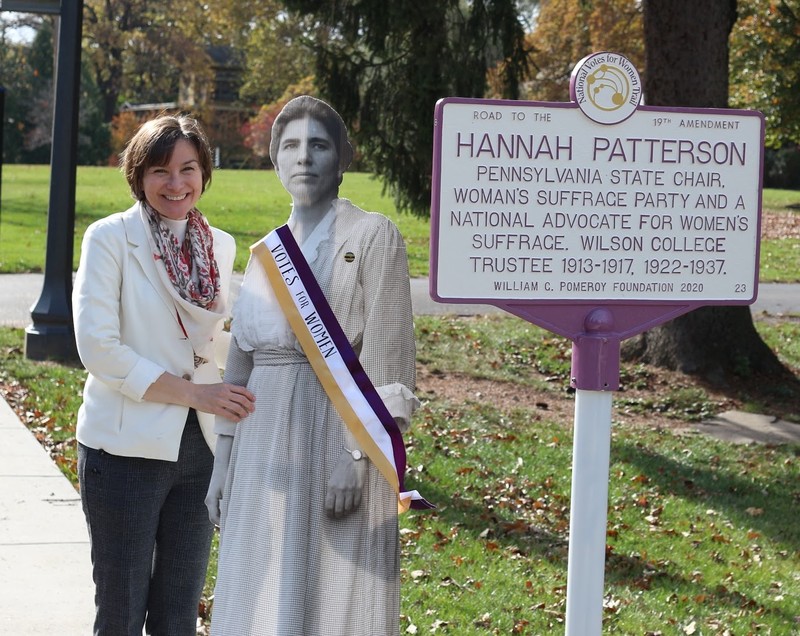 Amy Ensley, Director of the Hankey Center for the History of Women's Education at Wilson College, at the site of the historic marker honoring the life of Hannah J. Patterson