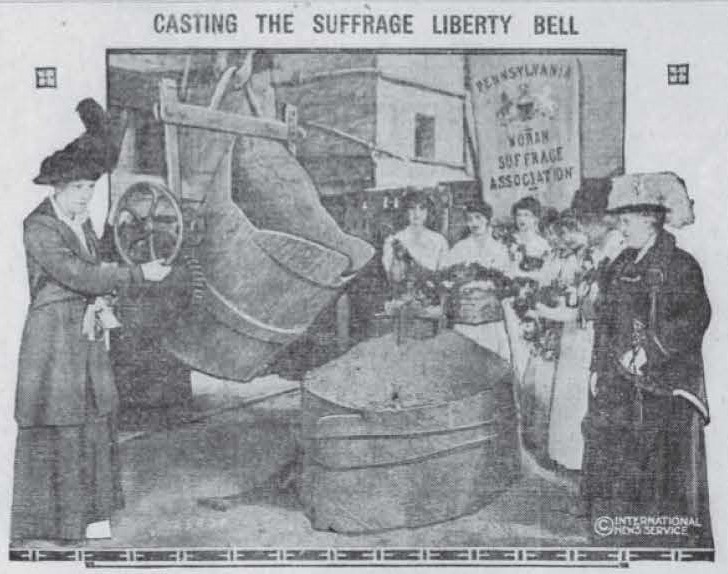 Two Pittsburgh women, Mrs. Roessing, president of the Pennsylvania Woman Suffrage Association and Miss Hannah J. Patterson, chairman of the Woman Suffrage party in this state, were in the delegation of woman suffragists who went to Troy, N.Y., for the casting on Wednesday of the new Pennsylvania Independence and Justice bell, which they hope will peal out the note of victory that the ballot has been given to women next November. The bell is the gift of Mrs. Charles Wister Ruschenberger of Stafford, Pa. Another well-known woman in the party who attended the ceremony was Mrs. George A. Piersol, chairman of the woman suffrage party in Philadelphia and vice president of the State Federation of PA Women. -Pittsburgh Post-Gazette. April 2, 1915 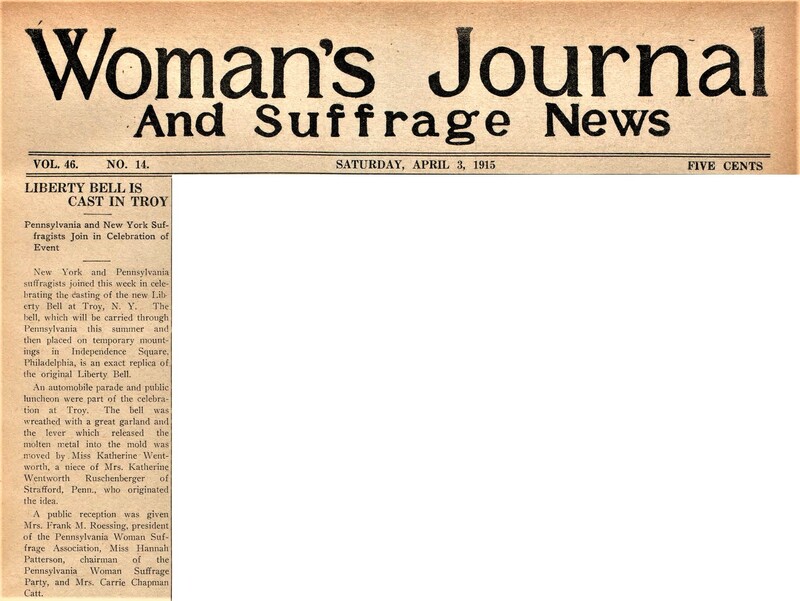 Hannah Patterson and Jennie Bradley Roessing along with Carrie Chapman Catt were given a public reception at the casting of the Justice Bell in Troy, New York.

On April 9, 1915 the members of the Pennsylvania Woman Suffrage Association held their State Convention in Harrisburg in order to "Advance Practical Methods of Gaining Publicity in Campaign to Win the Franchise" according to the Harrisburg Daily Independent headline.

"The women’s liberty bell, which the suffrage party hope to ring on election night at Independence Square, Philadelphia, was a campaign feature discussed at the session yesterday afternoon. Those who took part in the bell discussion were Mrs. Katherine Ruschenberger, who has just given the association $2000 to purchase the auto truck, besides giving the bell; Mrs. Frank M. Roessing, president of the State Association; Miss Hannah J. Patterson, chairman of the woman suffrage party; and Mrs. George Piersol, county chairman of Philadelphia."

"According to the plans now formulated the bell will be carried all over the State on an auto truck in a carefully mapped out itinerary. The trip will start May 15 in Bradford County. It will then proceed westward through the northern counties…after which the party will go in a southwestern direction to Allegheny. The bell will reach Pittsburgh, July 4, when the big suffrage demonstration will take place. From Pittsburgh it will take a zig-zag course, passing through nearly all of the remaining counties. The party will reach Philadelphia October 30, when it is believed a large street parade of the suffragists there will welcome the bell." 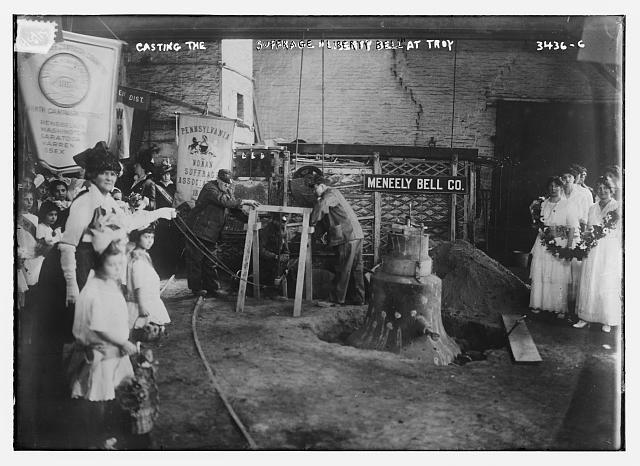 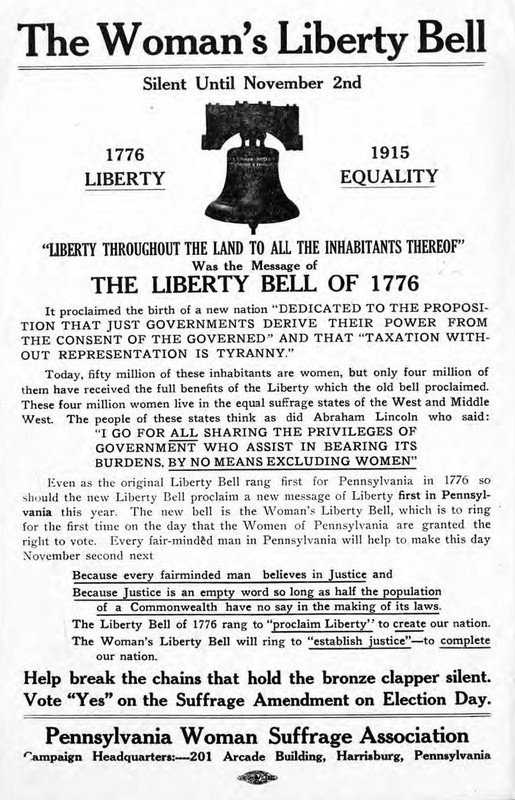 The Bell Begins Its Journey

A huge and enthusiastic crowd gathered to launch the bell on it's journey according to the Wilkes-Barre Times Leader on June 23rd. "A long string of gaily decorated automobiles, filled with officers of the State suffrage association...trailed after the big motortruck bearing the bell...after the presentation of the bell whose mission was to "Establish Justice" for the women of the state by helping them to secure the same political independence which the old Liberty Bell proclaimed for the men."

Frequent stops were scheduled along the way from county to county and local suffrage clubs arranged demonstrations including parades, receptions, bands and speakers. At one stop in Port Allegheny, an elderly woman on her deathbed asked that the bell be taken a block out if its way so that she could see it from her window.

Hannah Patterson spoke about the purpose of the Bell tour in Union City on June 30 when a crowd of more than a thousand came out despite the cold rain.

"Miss Hannah J. Patterson, state chairman of the Pennsylvania Woman Suffrage Party, explained today, 'It isn’t just curiosity that has brought the people out to see the bell. They have proven their interest in suffrage by their eager requests for us to stop, if only for a few minutes, to explain the bell’s message of political independence to the women of this state. And when our schedule does not permit us to stop, they besiege us for literature. Their honest eagerness to inform themselves on the suffrage question is more than encouraging. It is inspiring. It makes us feel that our campaign is well worth while.'" 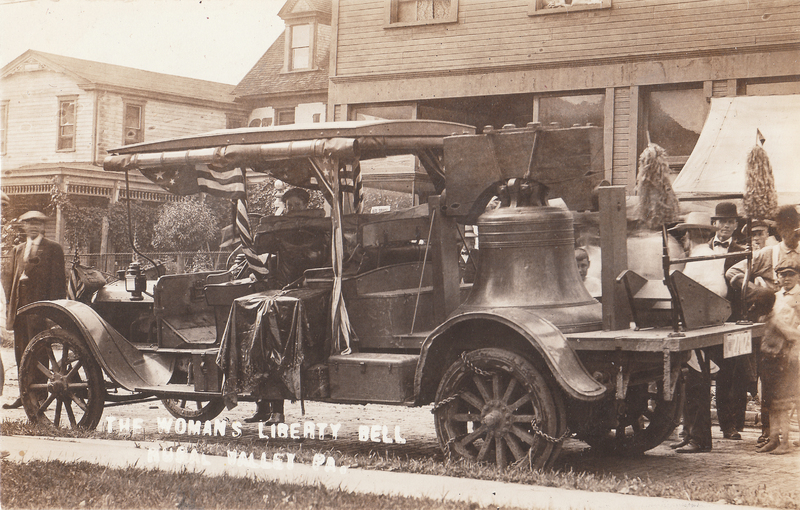 The tour continued to attract large crowds through small towns. The Altoona Tribune reported, "The women are hopeful that it will be November 2 of this year, when for the first time in the history of Pennsylvania, a suffrage amendment to the state constitution will be voted upon. They base this hope not only upon the spirit of fair play which governs the great majority of men of PA, but upon the tremendous enthusiasm which the big bronze symbol of their appeal for political independence has aroused in every town it has visited. In virtually every one of these towns, the crowds that have turned out to see the bell and hear the suffrage speeches have been bigger than those ever assembled for outdoor rallies of any sort in the past. Moreover, according to the newspaper reports along the route, the crowds have been more than enthusiastic. They have paid the suffragists the compliment of listening attentively to every argument advanced for giving women the ballot, and in many towns, hundreds of men have voluntarily pledged themselves to vote for the suffrage amendment in November. The speaker who will accompany the bell through this county as far as Altoona is Miss Louise Hall. Mrs. Richard Y. Fitzgerald will join the bell party at Altoona, speak here and will speak through the remainder of Blair county. Miss Hannah J. Patterson, state chairman of the Woman Suffrage party, will also be a member of the bell party, joining the party at Altoona." 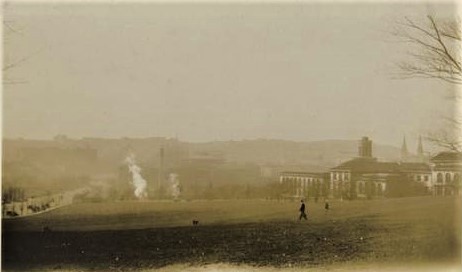 The Silent Demonstration on Flagstaff Hill

The Justice Bell arrival in Pittsburgh was timed to coincide with the Americanization Day Parade in Schenley Park on July 5, 1915. What followed was reported as one of the most remarkable demonstrations ever seen in Pittsburgh.

“In a long line they marched up and around Flagstaff Hill – society women, business women, native-born women, foreign-born women, maids, matrons and grandmothers – all dressed in white with the yellow sashes of the “Votes for Women” movement over their shoulders, and all silent in protest against the withholding from women of the ballot. As score after score of the wordless protestants filed by, the throng of thousands assembled for the exercises was hushed into a silence as impressive as that of the marchers.

"For fifteen minutes they stood in a semi-circle about the edges of the crowd, holding aloft huge banners which spoke for them the sentiments they refrained from sounding. Then as silently as they had come, they wheeled around the hillside and marched away past Carnegie Institute, over the Panther Hollow Bridge into Grant Boulevard and down Forbes Avenue, where they had erected a big rest pavilion for women and children. Beneath the canopy was the suffrage Liberty Bell, brought in yesterday from Crafton where it had been exhibited following its arrival from a tour of half the state.

"The demonstration was a surprise to everyone except the participants, its unexpectedness and its perfect execution making it particularly impressive. During the time the women stood on Flagstaff Hill the attention of the crowd was theirs. Everyone waited to see what they intended doing and when they finally lifted their banners and silently moved away, the quiet of the throng was broken with the blended murmur of 5,000 voices in an exclamation of surprise." 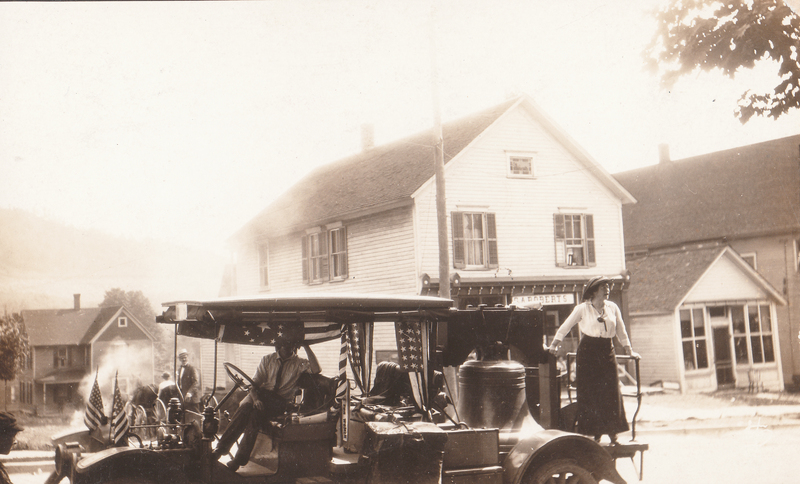