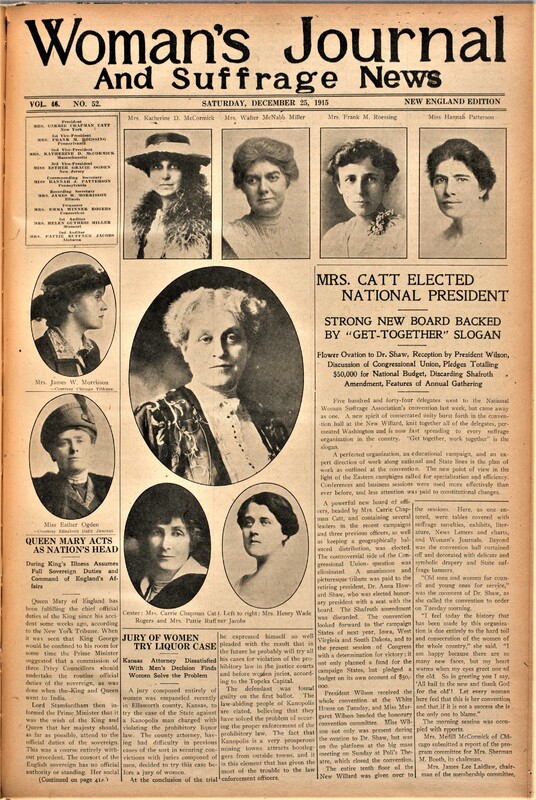 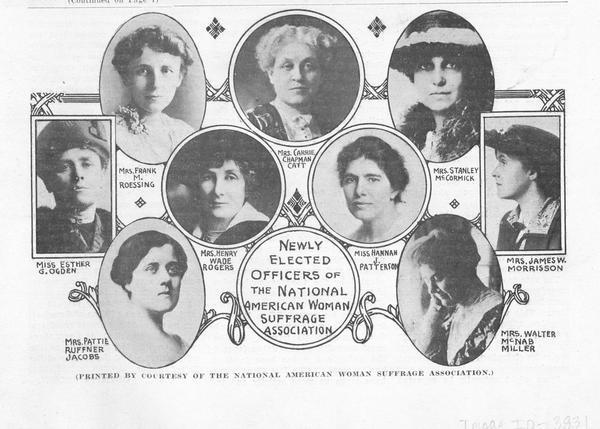 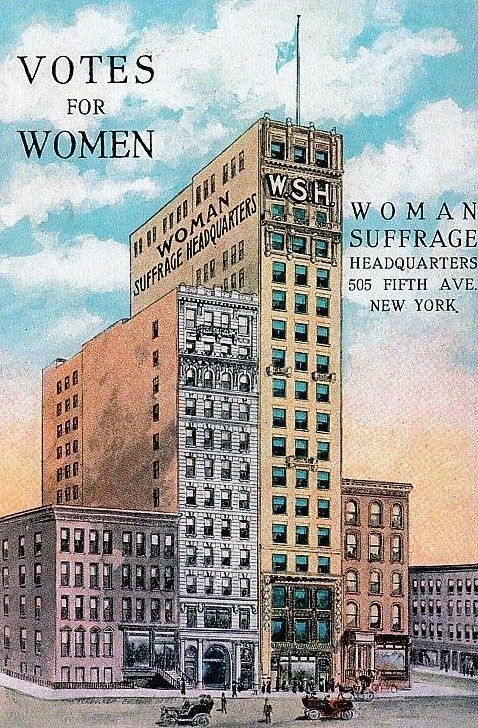 President Wilson Will Vote for Suffrage in New Jersey

In October of 1915, President Woodrow Wilson declared publicly that he was in favor of Woman’s Suffrage on a state by state basis. In November, he voted for the New Jersey state suffrage amendment at the New Jersey general election. Public opinion for suffrage had grown exponentially and was now viewed as only a matter of time, even through the amendment failed to pass in the four large Eastern states in which it was on the ballot that fall.

Before the convention, an honorary committee was formed in Washington which included Woodrow Wilson’s daughter Margaret and a reception was held at the White House.

Patterson Part of Committee Attempting to Work with Alice Paul

On December 17, a committee of five NAWSA leaders were appointed to confer with members of Alice Paul’s Congressional Union to attempt to find common ground moving forward. The NAWSA members were Carrie Chapman Catt, Hannah J. Patterson, Antoinette Funk and both Ruth Hanna McCormick and Katherine Dexter McCormick. The Congressional Union representatives included Alice Paul and Lucy Burns and several others. They wanted the CU to be an affiliate of NAWSA but refused to alter their policy of opposing the political party in the White House regardless of the support of individual members of congress within the party. Catt refused their request.

On December 18, M. Carey Thomas, the president of Bryn Mawr College held the annual luncheon for the National Collegiate Equal Suffrage League at the New Ebbit Hotel with 225 women graduates on the topic How to Advance Woman Suffrage by Making Friends Instead of Enemies. Speakers included Anna Howard Shaw, Hannah J. Patterson and Jennie Bradley Roessing. 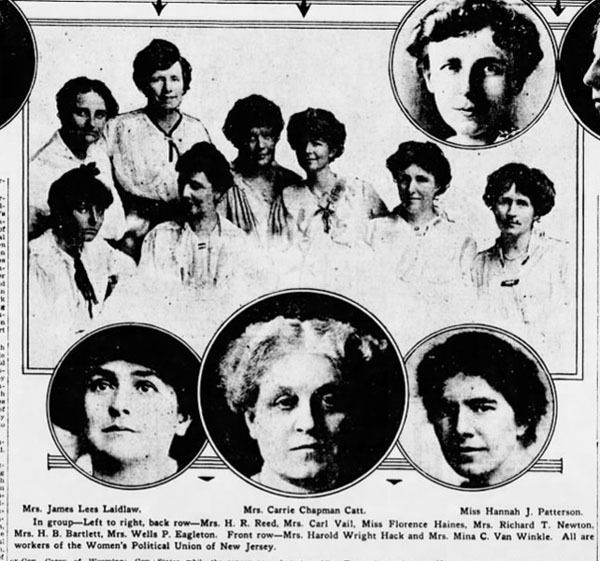 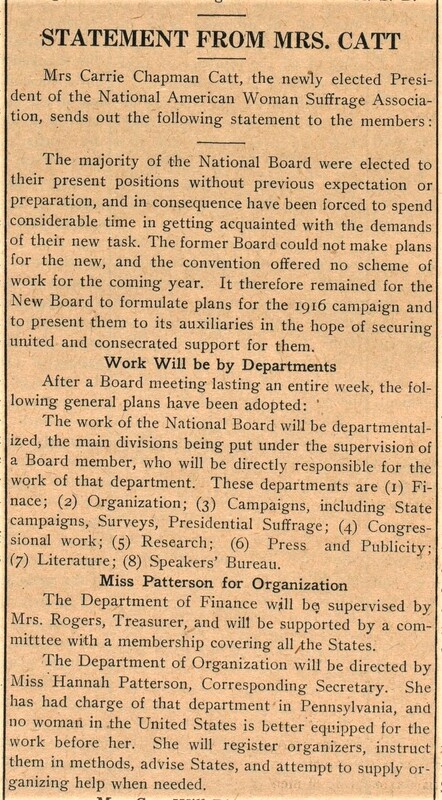 Roessing to Work for Federal Amendment, Patterson to Organize States

In February 1916, at the first board meeting of the NAWSA, Carrie Chapman Catt announced the coming year’s priorities which included a two-pronged approach to winning suffrage which would later become known as the Winning Plan. She would continue to focus on winning state suffrage amendments where and when possible and she would expand the effort to gain a federal amendment. To lead these efforts, Catt had two women in mind: Hannah J. Patterson and Jennie Bradley Roessing.

Newspapers reported that, “In making the announcement of Miss Patterson’s appointment Mrs. Catt pays a high tribute to her, saying she was largely responsible for the organization of the Pennsylvania suffrage forces and that no woman in the United States is better equipped for the work. Miss Patterson’s duty will be to register organizers, instruct them in methods, advise the various states as to their campaigns and attempt to supply organizing help when it is needed.” 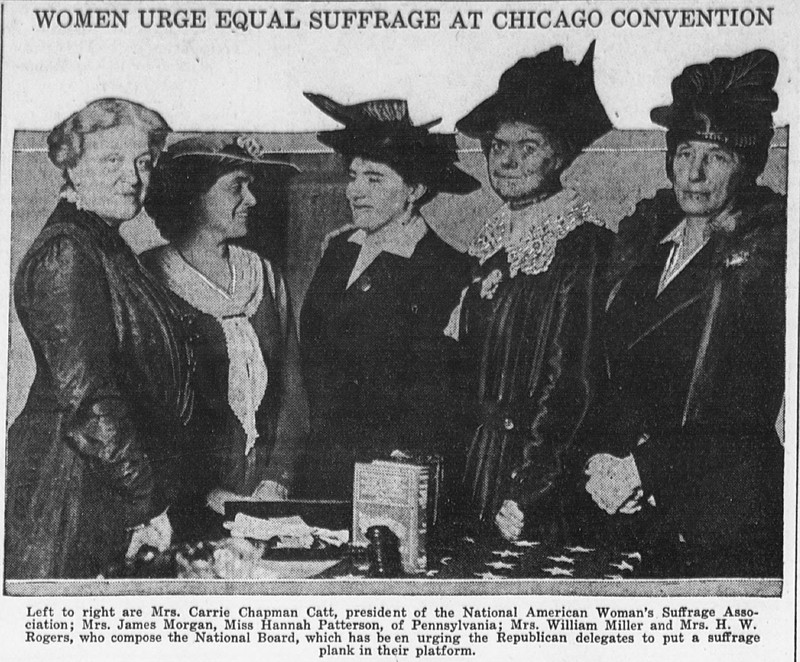 In June 1916, both major political parties held their National Conventions to formally nominate their presidential candidates. The Republican National Convention was held June 7 to June 10 in Chicago. The party would announce their official political platform and the suffragists were determined to have a suffrage plank included in the platform.

Jennie Bradley Roessing in her report as Chair of the National Congressional Committee of NAWSA Convention in 1916 wrote about the struggle to include the suffrage amendment in the Republican party platform:

It is but fair to say that had we not had Hannah Patterson’s assistance at hazardous moments, the suffrage planks would not be in the two national platforms today. Food, sleep, rest, pleasure, all were day after day given up by this most self-sacrificing officer. She it was who kept with one other (Roessing herself) the lonely vigil the night of June 6 at the door of the Republican Resolutions Committee while it debated for hours its sub-committee’s adverse report on the suffrage plank. The crisis in our work for both the planks came in this sub-committee of seven, for we knew that if we lost in Chicago, there would be no hope in St. Louis. At midnight that all-powerful sub-committee by a vote of 5 to 4 turned down our plank and refused to permit suffrage to be mentioned in the platform in any way. That committee has seldom been reversed in all the history of the party. When later Senator Borah, also sleepless and hungry, came to us in one of those agonizing moments when decision must be made at once, when we could not reach our president or our board, it was Miss Patterson who made the decision that won the plank. Senator Borah told them that the plank the National Suffrage Board had submitted endorsing a Federal Amendment was absolutely impossible, but one could be obtained declaring for woman suffrage by State action. They accepted it which was a wise thing to do as had the Republican platform not favored woman suffrage per se the Democratic platform adopted the following week, would not have done so.

NAWSA planned to have 20,000 women march from Michigan Avenue to the Coliseum and Catt and the other national officers, including Patterson, would present the suffrage plank to the resolutions committee. A monstrous thunder storm that afternoon reduced the number of marchers to around 5,000. They burst into the hearing, bedraggled and sopping wet just as the anti-suffragists were claiming women did not want the vote. As had been worked out the night before, the Republican party included the suffrage amendment by state action even though their candidate, Charles Evans Hughes had announced during the campaign that he personally favored the federal amendment.

The following week, at the Democratic National Convention in St. Louis, eight thousand women lined the avenue between the hotel district and the coliseum creating a walkless parade through which the men had to travel back and forth. “The effect of this living hedge on either side, blazing with gold, but absolutely silent, was remarkable, and caused considerably more comment during the rest of the day among the delegates than the convention itself. A striking tableau varied the golden lines in front of the old art museum. This showed the goddess of liberty and a group of women representing the full suffrage, partial suffrage and no suffrage states.”

The question of what form the suffrage plank would take in the Democratic Party Platform was taken up by the Democratic committee. Hannah Patterson represented NAWSA’s position and Alice Paul represented the newly formed National Women’s Party position. At the resolutions committee hearing later that evening, Carrie Chapman Catt led the NAWSA delegation and Ann Martin represented the NWP. The result was the predicted plank of support for suffrage by state action – matching the plank of the Republicans. 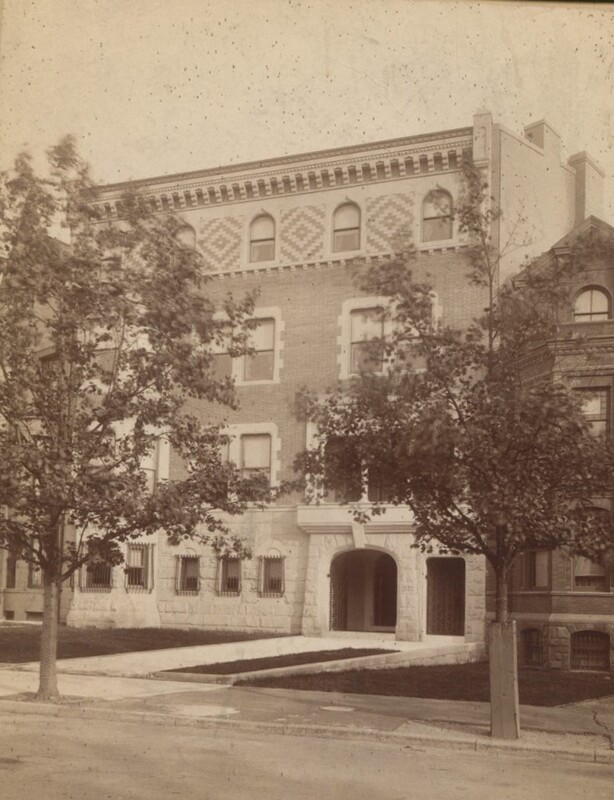 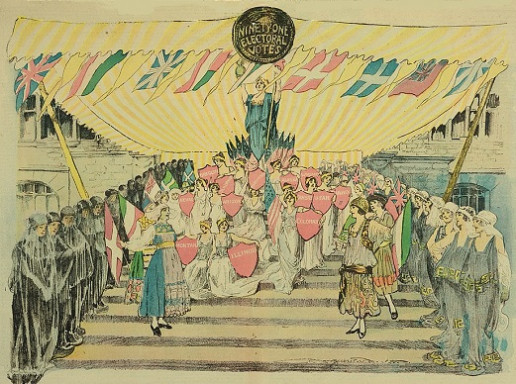 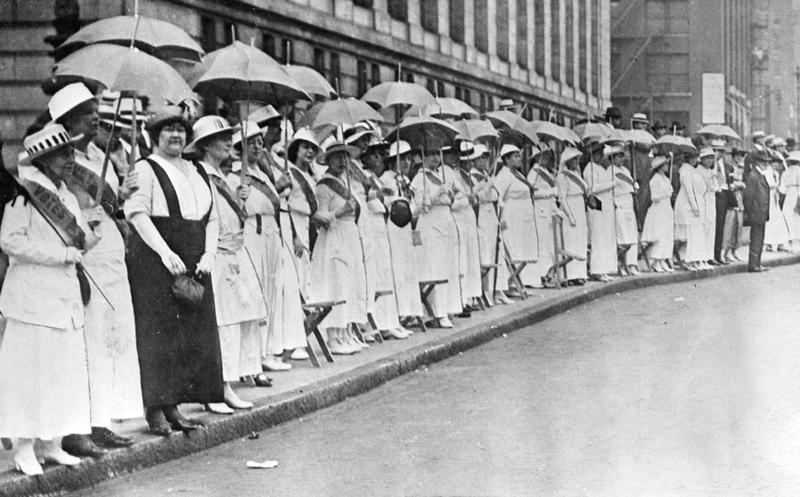 The annual NAWSA convention of 1916 was held in Atlantic City in September instead of December in order to be prepared for the presidential election in November. Both presidential candidates were invited to speak at the convention. Republican candidate Charles Evans Hughes was campaigning in the West, but President Woodrow Wilson agreed to speak. He was accompanied by Mrs. Wilson wearing all white. He followed speakers including the president of the National Women’s Trades Union League, Miss Julia Lathrop of the National Children’s Bureau and Katharine Bement Davis.

After listening to the speakers, Wilson rose to address the crowd. He noted, “I have felt as I sat here tonight the wholesome contagion of the occasion. Almost every other time that I ever visited Atlantic City I came to fight somebody. I hardly know how to conduct myself when I have not come to fight anybody bot with somebody. We feel the tide; we rejoice in the strength of it, and we shall not quarreled in the long run as to the method of it, because when you are working with masses of men and organized bodies of opinion, you have got to carry the organized body along. The whole art and practice of government consist no in moving individuals but in moving masses. I have not come to ask you to be patient, because you have been, but I have come to congratulate you that there has been a force behind you that will beyond any peradventure be triumphant and for which you can afford a little while to wait.” After the thunderous applause had died down, Anna Howard Shaw responded, “We have waited long enough for the vote, we want it now, and we want it to come in your administration!” Wilson smiled and bowed and the audience rose in a standing ovation.

Both Hannah Patterson and Jennie Bradley Roessing declined to run again for their executive board positions. They had spent the last four years in constant work for the Pennsylvania state suffrage amendment, and then the federal amendment. They needed a break.

Anna Howard Shaw ended the convention with a speech about Americanism saying, “The anti-suffragists have said that when women have the vote they will have less time for charity and philanthropy. They are right – when we have the vote there will be less need for charity and philanthropy. The highest ideal of a republic is not a long bread line nor a soup kitchen but such opportunity that the people can buy their own bread and make their own soup. Opportunity must be for all, men and women alike, and the peoples of every nationality.” 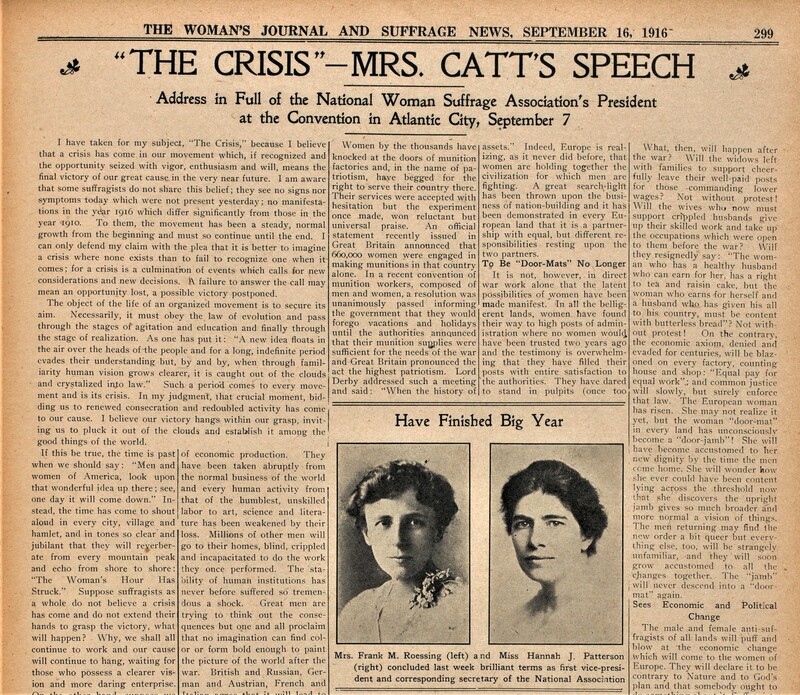